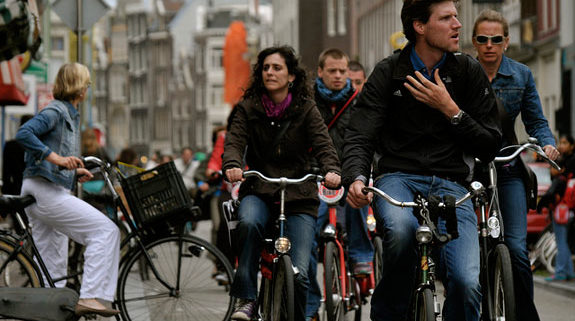 Stepping out of the train station in the center of Amsterdam, I was immediately struck by the way the city flows.  “It’s orderly… but organic,” was the thought that came to mind.  There are three times as many bicycles on the road as cars (three times!), and even more pedestrians.  Then there are the busses and the electric trams.  Every centimetre of the city seems to be a swirl of constant motion.  And yet, in the week that I was there, I saw not a single traffic light or stop sign (nor a helmet, in fact, even on children).  It should have been rampant chaos, but instead it was a beautiful, self-organizing dance.

Surely, there are lessons here for organizations and for the thrivability movement, I thought.  And there were.

My colleague, Belina Raffy, and I were there to support the emerging thrivability movement in the Netherlands.  (We loosely define thrivability as the intention and practice of aligning organizations with how life thrives.)  We gave a day-long immersive workshop and co-hosted an evening event.   I opened the workshop by saying that, on first impression, it seems that the Dutch have something important to teach the world about holding both order and chaos – a key skill for thrivability.

Belina and I, on the other hand, were awkward pedestrians while we were there, slightly fearful at every street crossing and regularly interrupting the flow.  On two occasions in Berlin (where we were the week before), we accidentally stepped in front of cyclists who then shouted at us in German (to which Belina said, “Let’s assume they’re saying something nice, like ‘YOUR HAIR LOOKS GREAT!’ Or ‘YOU’RE DOING REALLY IMPORTANT WORK IN THE WORLD!’”).

So, what’s behind Amsterdam’s self-organizing flow?  And what can the Dutch example teach us about making our organizations more fluid, more responsive, more able to navigate complexity?

First, there is helpful structure.  Unlike most other cities, Amsterdam has a vast network of segregated bicycle lanes, with their own raised curbs on both sides – a physical “groove” that guides and protects cyclists.

Even with separate lanes, though, bicycles still have to negotiate with cars, trucks, busses, trams and pedestrians at intersections.  And again, infrastructure plays a vital role.  One article describes it nicely: 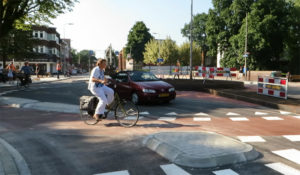 “[B]ecause of the design [of most intersections], the speed of motor traffic is reduced to an almost equal speed as that of cyclists. This makes negotiating the right of way a lot easier.  …[T]raffic flows very smoothly and motor traffic and cyclists really take turns. Cyclists sometimes even adjust their speed so they can just pass in front of a motor vehicle, or right behind it. The Dutch generally don’t like to come to a full stand still and they try to make sure that others don’t have to stop either…. [T]he traffic flow is very high even though the speeds are relatively low.”

Interesting!  This reminds me of the saying, “You have to slow down to go fast.”

For organizations, it raises some obvious questions.  What changes might you make to the physical layout and design elements of your space to enable work to flow more freely, facilitating collaboration, inspiration and natural rhythms?  The Dutch example suggests that separate space for individual and dedicated work is needed, but also space for easy interaction.  Adam Alter, author of Drunk Tank Pink: And Other Unexpected Forces That Shape How We Think, Feel, and Behave, describes the design features that make Pixar and Google some of the most creative and collaborative workspaces in the world:

Beyond physical design, the Dutch example also invites us to consider how well the pattern of meetings supports flow and vibrancy in our organizations – when they’re scheduled, who calls them, who comes, what is considered worthy of being on the agenda, how conversation is hosted.  These are “grooves,” as well.  We helped Montreal client Crudessence establish a Community of Stewards – 18 people from across the 85-person company who meet roughly every two months for half a day to learn together, to build relationships across the organization, and to make sure the company is growing into its manifesto.  For more frequent, project-based meetings, we’re also fans of the Agile approach.  What new or improved grooves could you build into your organization’s pattern of meetings?

And what other organizational “grooves” could be created to guide wise actions, without fear or second thought?  In another local example, Espace pour la vie (a coalition of four nature museums) decided to change its organizational structure, moving Human Resources out from under Finance & Administration and reshaping it into a vital pillar called People & Culture.  That shift has contributed to a spectacular transformation of the organization.

There’s also more than structure at play in the Netherlands.  Tatiana Glad, founder of the Amsterdam Impact Hub, had some additional insights to share.  “There’s a hierarchy,” she explained, referring to the right of way.  The trams don’t move for anyone – they’re on tracks.  After that, priority generally goes to pedestrians, then bicycles, then busses, then cars and trucks.  There’s also the culture of “taking care of the person behind you,” as Tatiana described it – keeping a steady pace and trajectory, staying to the right, ringing your bell to signal that you’re passing on the left, pointing in the direction you’re about to turn.

For your organization, the question this raises is: what are the minimum decision forks that everyone needs to understand to be able to negotiate complex and unpredictable circumstances smoothly?  For our clients, this is the purpose of a manifesto – it’s a concise and clear compass for future action.

And what would “taking care of the person behind you” mean, in your context?  Could be a very rich conversation to have. 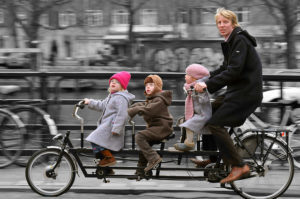 Tatiana went on to explain that, in Amsterdam, “All drivers are also cyclists.”  So there’s an innate awareness and affiliation that isn’t there in other cities.  In organizations, that seems to correspond with helping people deeply understand each other’s perspectives, projects and challenges, as well as intentionally “building the field” – nurturing the invisible relational space.  The philosophies and practices of the Art of Hosting have much to offer in this regard.  This is also where the methods and mindsets of Applied Improvisation help people respond deftly to complexity and uncertainty and practice being in a productive rhythm together.

And then there’s the Dutch reputation for being good-natured, polite and straightforward.  Many cite this national character as vital to the success of Holland’s multi-modal transport system.  Practices like mindfulness and Non-Violent Communication help the non-Dutch adopt a similar stance in our organizations (and in life).

So to get on the path of thrivability, do you just have to piece together all the different approaches I’ve mentioned above?  Convert to an interactive office plan, create a Community of Stewards, train everyone in Applied Improv and Non-Violent communication, launch a participatory process to create a manifesto…?  Well, yes, that would probably get you a long way in the right direction.  But there’s something more subtle required.  Something that brings us back to our loose definition of thrivability: “the intention and practice of aligning organizations with how life thrives.”

There’s a beautiful video that reveals that Amsterdam was once a city dominated by cars.  The current culture and infrastructure were the result of a collective choice.  In the 1970s, there was a shared intention and a conscious decision to create an experience of community more in line with how life thrives.

Beyond specific techniques or the latest management fads, then, thrivability calls for a conscious commitment to nurturing life.  It asks us to recognize the life in our organization– acknowledging that the organization isn’t something we can fully manage and control, but that our role is as stewards and participants, creating fertile conditions for life to flow and thrive across the fullness of the organizational ecosystem – and beyond.

In Amsterdam, Tatiana’s advice to us was simple: “Get on a bike.  To understand the flow, you have to experience it.  Just get on a bike.”

That experiment will have to wait for our next visit to Amsterdam.  But it struck us that this is also what’s needed to understand thrivability – the experience of it.  Like learning to ride a bike, we can explain all the theory, help you get all the right gear, and show you shining examples.  We can offer helpful advice and encouragement, running alongside and helping you stay up.  But it’s not truly something someone else can teach you.  You have to figure it out for yourself.  You have to get on the bike and ride.

For those of us championing the thrivability movement, then, the lesson is that we need to offer opportunities for people to “get on the bike.”  This is what Belina and I are doing to an increasing degree with our consulting, events and the upcoming Thrivable World Quest.  In many ways, this is also what Tatiana and others in the global Impact Hub network are doing within their innovative co-working spaces.

For individual organizations, the lesson seems to be: get on in whatever way you can, including the tangible steps described above.  Keep moving forward.  Take care of the people around you.  Tune into the path behind you even as you focus on the path ahead.  Adjust your speed and direction until you find the flow.  And you will find it.

The video I mentioned above says that the Dutch don’t understand it when people ask them about their “bicycle culture.”  It’s too much a part of them to be identified, analyzed and described.  By the same token, thrivability isn’t a checklist or a destination.  Even as there are individual tools and techniques that help along the way, most of all, thrivability is a way of (organizational) life.

What are your thoughts? 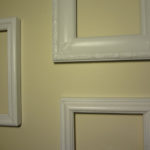 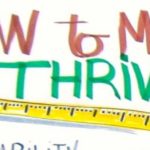