“Don’t grow if it will make you sick.”

This is what the “mother” had told them.

My client was a small, dynamic company that produced kombucha, a natural fermented drink believed to have significant health benefits. The group had asked me to help them figure out how to respond to a huge upsurge in demand without losing the soul of their beautiful little company.

What I loved about these people was their embodied connection with life and living systems principles. After all, kombucha is a living product, made from a symbiotic culture of bacteria and yeast that forms a gelatinous substance known as a “mother.” Great personal and ongoing care goes into tending to the mother, since it (she?) is what actually does the work of producing the kombucha.

As the group explored various ways forward, one of the questions I invited them to reflect on was, “What would the mother advise?” And the answer that emerged from their reflection, as if in a clear and gentle voice, was: “Don’t grow if it will make you sick.”

Was that even an option?

It was a shocking, unsettling message. And yet its wisdom was undeniable.

As the group wrestled with this advice, their exploration led them to the compelling option of propagatingrather than growing. They excitedly imagined cultivating a network of local partners: small brewpubs housed in hubs of entrepreneurship, creativity and conversation, in which kombucha infuses the space — and the community — with health and inspiration. What if, instead of gathering around alcohol, people could gather around a healthful drink? What if kombucha’s unusual collaboration between bacteria and yeast – hostile to each other in other circumstances and conditions – could be offered as an inspiring metaphor for our own potential to collaborate across difference? Instead of the soulless, over-prescribed franchise model, what if their network of partners could be locally responsive and self-organizing, like kombucha itself? Instead of simply growing their own production capacity and wealth, what if the group could grow the generative capacity of their company – its ability to generate new possibilities, new offshoots, new life? And rather than making them sick, what if such a move actually had a regenerative effect, making them and the community more healthy and whole?

None of this vision could have come into view without first expanding the group’s understanding of what it means to be a company. Rather than something fundamentally separate from the people within it – simply a production and output machine that must be grown at all costs – they came to see their company as something personal, alive and embedded in a living world.

Their experience begs the question: what other possibilities lie beyond the limits of our existing assumptions about growth?

And in fact, the region of Flanders in Belgium is engaged in just such an inquiry. My friend Anna Pollockhas been working with VisitFlanderson what she calls “regenerative tourism.” As part of the project, CEO Peter De Wilde recently narrated this breathtaking video about their project, Travel to Tomorrow. Growth in tourism, he says, “means lots of money, true, and… is that always a good thing? Perhaps the cost is higher than we might expect.”

“Could tourism possibly create more value with fewer tourists. Giving them the space to discover the things we want to share. The things that make us unique.”

“Who are we, the people who live and work here? Generous givers, who really want to enrich one another? Or do we just want to make ourselves rich?”

Just a few years ago, those questions would have been unthinkable.

Unlike the kombucha company, the team at VisitFlanders doesn’t have answers yet. Their destination remains undefined. But importantly, they’ve launched an ambitious campaign to engage people across Flanders in meaningful conversation to imagine together what more is possible, beyond assumptions of growth at all costs.

Here in Quebec, we can see growth for its own sake in the plague of blue-green algae we’ve experienced in our lakes in recent summers. Over-fertilized by human activity, the algae takes up all the oxygen, preventing other species from thriving. The water becomes toxic to all forms of life, including humans. This is where we find ourselves with today’s monopolies, mega-banks and ubiquitous franchise chains. At some point, scale and efficiency become degenerative rather than regenerative, actively working against life’s ability to thrive.

If we don’t pause to shake loose the assumptions that guide our actions, then we won’t see the many unimagined options available to us. We’ll continue to operate within the same ruts that are leading us steadily toward destruction, despair and ecosystem collapse. In place of growth as our goal, why not aim for more learning, more creativity, more love? Why not set our sights on thrivability, actively cultivating life’s ability to thrive wherever we find it? 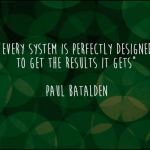